To ensure a customer focus, while providing the highest quality, most innovative instrumentation to the microscopy community. Fischione will continue to serve existing needs, as well as address the requirements of emerging microscopy and nanotechnology applications. 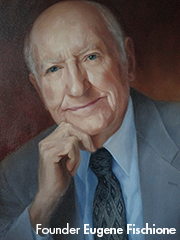 Eugene A. Fischione founded E.A. Fischione Instruments, Inc. in 1966. As a research machinist at the U.S. Steel Technical Center (formerly U.S. Steel Research Center) from 1956 to 1977, Eugene Fischione was involved with many of the early developments in electron microscopy. His contributions were concentrated in the area of developing and fabricating experimental instrumentation.

As technology advanced, the need increased to develop products that prepare the specimen for observation and analysis in the electron microscope (EM). Working with leading materials scientists, Eugene Fischione developed the Automatic Twin-Jet Electropolisher. From a thin foil, this device prepares a specimen acceptable for direct observation in a transmission electron microscope.(1) This instrument is still being sold and can be found in laboratories in more than 40 countries.

After graduation as a mechanical engineer from the University of Pittsburgh in 1978, Paul E. Fischione, son of the founder, gained experience in the research and engineering departments at Mine Safety Appliances Company (MSA) and United Technologies Corporation (UTC). After acquiring ownership of the company in 1986, Paul Fischione established its future direction and initiated new product developments, including:

The Fischione Instruments product line was expanded to include all of the major devices that are required for preparing TEM specimens:

In keeping with its tradition of innovation in advanced specimen preparation technology, and considering the increased usage of focused ion beam (FIB) systems for the preparation of specimens from specific sites within the bulk material, Fischione developed technology to enhance the quality of both conventional and FIB-prepared specimens. This yielded the Model 1040 NanoMill® TEM specimen preparation system, which was introduced in 2004. The NanoMill system features ion energies as low as 50 eV and a beam size as small as 1 µm.

To take specimen preparation to the next level, Fischione Instruments launched three major new products in 2010. The Model 1050 TEM Mill (since replaced by the Model 1051 TEM Mill in 2016) was a conventional ion milling system used for creating the thin, electron transparent specimens needed for TEM imaging and analysis. Applying TEM ion beam milling technology to scanning electron microscopy (SEM) samples yielded the Model 1060 SEM Mill, which was updated to the Model 1061 SEM Mill in 2016. Leveraging much of the product technology contained in the TEM Mill, the SEM Mill serves a broad range of applications including semiconductors, enhancing surfaces for electron backscatter detection (EBSD), as well as the rapidly expanding field of large-scale imaging of geological samples.

Building upon the outstanding tradition of the Model 1020 Plasma Cleaner, the Model 1070 NanoClean was introduced.  The Model 1070 uses plasma technology to automatically and quickly remove organic contamination (hydrocarbon) from electron microscopy specimens, specimen holders, and stubs.

The WaferMill solution for CD-SEM sample preparation provides selected-area milling on full 300 mm wafers, which allows the delayering of multiple pre-selected regions on a full wafer from the top down. The entire process is automated; there is no need to manually touch a wafer.

The addition of the PicoMill system and the WaferMill solution mark Fischione's significant investment in developing products for the semiconductor market segment.

Fischione also signaled its commitment to the life sciences market segment with the introduction of the Model 2550 Cryo Transfer Tomography Holder, which is ideal for specimens that require liquid-nitrogen cooling for transfer to the TEM for imaging and analysis.