The sample preparation breakthrough of the century

The Model 1064 ChipMill is a fully integrated solution for large-scale delayering – up to a 10 x 10 mm milling area – of both memory and logic semiconductor devices. Compared to all other methods, the ChipMill produces the flattest surface over the largest area. The ChipMill’s artifical intelligence automatically adjusts milling parameters to yield nanometer flatness within the prepared area.

The ChipMill reduces time and costs associated with research and development, manufacturing, quality assurance, and failure analysis by yielding unsurpassed results. As the demand for semiconductor devices grows, device sizes decrease, and architecture becomes more complex, the ability to perform controlled delayering during all phases of the product life cycle is essential.

When the sample surface is excited by the electron beam, corresponding secondary electrons are collected by the SED. Electron images are displayed on one of the ChipMill’s monitors.

Backscattered electrons are produced by the elastic scattering of the primary electron beam with atomic nuclei. Because information is generated by the nucleus of the atom, an indication of elemental composition becomes known.

EDS detects X-rays emitted from the sample surface, providing the elemental composition of the delayered device.

A SIMS system identifies the elemental composition of the top device layer.

The role of electron microscopy in semiconductors

Electron microscopy is used to support every phase of the semiconductor life cycle: research and development, manufacturing, quality control, and failure analysis.

Chips are comprised of multiple layers, with each layer having a thickness ranging from a few atomic planes to several microns and node sizes of 3 nm or less. The need for precise, controlled delayering has never been more critical in supporting electron microscopy’s role of understanding material properties and chemistry at the atomic scale.

Additional techniques enabled by precise delayering are electrical probing to test individual circuits; metrology to measure feature sizes to ensure compliance with design specifications; post-mortem, single-defect failure analysis to remove material until the fault location is revealed; and reverse engineering to delayer a chip in a serial manner for the subsequent analysis of individual layers.

Prior to ChipMillingSM, standard depackaging techniques apply. These methods typically employ mechanical or chemical processes that are better suited to removing significant amounts of material as compared to the precise thinning afforded by an ion beam.

Once the depackaged chip is mounted onto a standard SEM stub, it is transferred through the ChipMill’s load lock and positioned on the sample stage within the vacuum chamber.

Following the initial set-up procedure, the chip is ion milled until the predefined end point is achieved. In many cases, the end point is an individual metal layer. After ChipMilling, the chip can be transferred to any one of several analytical devices.

The ChipMilled sample can be placed into a focused ion beam (FIB) system for the site-specific extraction of transmission electron microscopy (TEM) lamellae.

All system components are included within a chamber that is evacuated by an oil-free vacuum system.

During milling, the ion beam scanning pattern is controlled by an advanced algorithm which processes the output of various detectors:

The ChipMill features an artificial intelligence (AI) process that incorporates a feedback control loop to adjust the ion beam milling parameters in real time. The ChipMill receives and analyzes data from the various detectors to quantify both surface flatness and chemical composition of individual device layers.

Depth profiles are calculated by the ion beam control algorithm, which automatically adjusts the ion beam raster pattern in terms of both dwell time and current density per point while moving across the delayered area. This method of continuous feedback yields a highly planar sample surface.

The ChipMill is programmable through a standard computer interface. System operating conditions are programmed and viewed on a dedicated monitor. An on-board touchscreen, positioned next to the load lock, facilitates sample exchange.

User controls can be placed either adjacent to the ChipMill or in a separate room.

There are various methods of end-point detection, one of which is time-based. However, for time-based end-pointing to be effective, both layer thickness and milling rate need to be very well understood.

The ChipMill’s pioneering end-pointing technique relies upon the acquisition of images and analytical data: 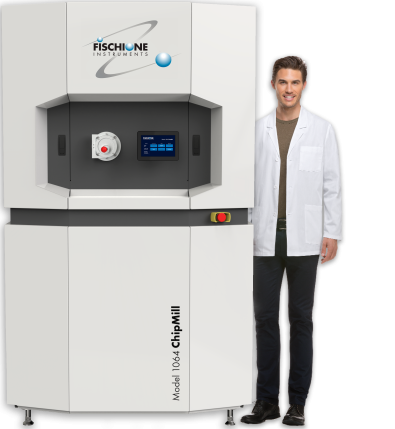