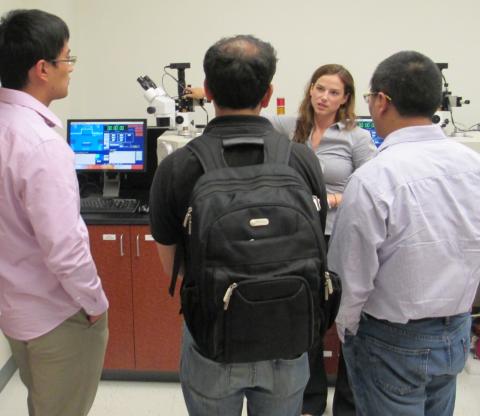 In conjunction with the EBSD 2014 conference held June 17-19 at Carnegie Mellon University, Fischione held an event for conference attendees — “Fischione After Hours” — on Tuesday, June 17.

Guests rode a shuttle bus from CMU to the Fischione facility and were greeted with drinks and food upon their arrival. Following a welcome by Fischione CEO Paul Fischione, Fischione Application Scientist Anjana Asthana, Ph.D., introduced the scientific program for the evening; a presentation on the use of the Model 1060 SEM Mill for preparing samples for EBSD, which was delivered by Fischione Application Scientist Rocco Cerchiara, Ph.D.

The guests then toured the production/assembly area and the application labs. On hand in the applications labs were Oxford Instruments representatives to discuss how they use the Model 1060 SEM Mill in conjunction with their EBSD analysis tools.